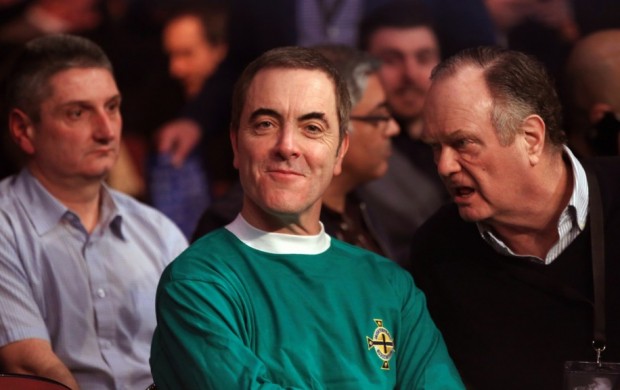 The star of popular dramas such as “The Secret,” “Cold Feet” and “Lucky Man,” never forgets his roots and for the organisers of the SuperCupNI, he is the ideal choice to open the 2016 tournament.

Jimmy’s family moved to Coleraine from Broughshane when he was at primary school and he remembers how his father, also James, taking him to Ballycastle Road to watch the local team play.

Jimmy still takes in matches with his father when his hectic schedule permits and remains a generous financial backer of his local club. His other football passions are well documented – Manchester United and Northern Ireland.

Jimmy, Chancellor of the Ulster University, admires what Northern Ireland manager Michael O’Neill, a graduate of the SuperCupNI, has achieved during his time in charge of the national side, describing it as “astonishing”.

“There was a feel-good factor at home with Northern Ireland going through to Euro 2016 and progressing out of the group stage was monumental.

“Michael is someone who brings people together and that is something that will be reflected in the level of support this year and the sense of community and brotherhood that there was in France where the team excelled and our fans too.”

Victor Leonard, chairman of the tournament, says: “Jimmy is probably the most enthusiastic football fan you could ever meet. His passion for the game is infectious.

“I know he will be warmly welcomed in his home town when we stage the welcome parade through the streets from the Diamond to the ground.”

Before that, an Under-21 event will kick off the SuperCupNI on Thursday July 21, with two semi-finals. Celtic tackle Real Sociedad at Ballymena Showgrounds while Everton meet Espanyol at Coleraine the same evening. Both games start at 7.45pm.

In addition to the SuperCupNI website, the following outlets will be selling tickets for the Under-21 games at Coleraine and Ballymena Showgrounds:

Programmes will also be on sale this week.