U13 Portadown – Reds ready for clash with Hammers! 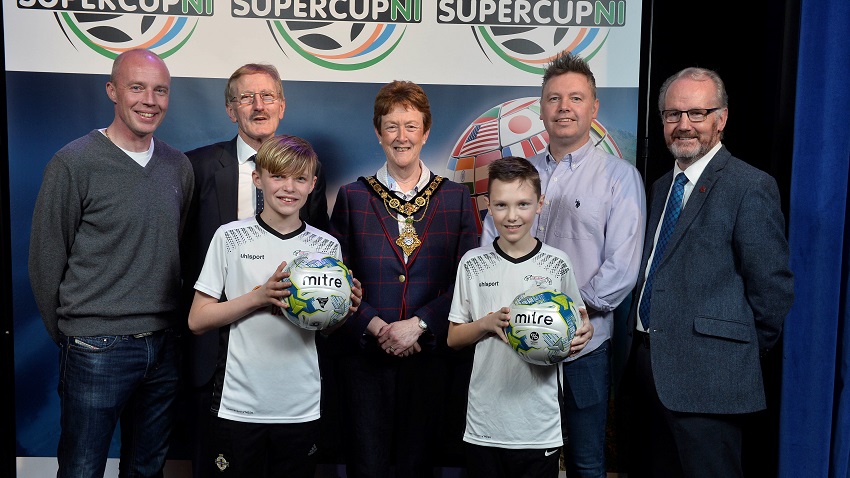 Once the final team of the U13 Minor section of the 2018 Super Cup NI was revealed all of the 9 local sides in the draw were desperately hoping for a crack at Premier League giants West Ham United.

That opportunity will fall to Portadown FC Youth, who will go toe to toe with the Hammers in an intriguing Group A which includes hometown side Coleraine FC and Mid-Ulster rivals Dungannon United Youth.

Portadown coach Mark Porter said his side are eagerly awaiting a chance to test their skills against the Londoners.

“We were absolutely buzzing when we saw West Ham United were in our group and you could see the excitement in the faces of the two players we brought up to the draw.

“It is all that the boys have talked about since, but we won’t be overawed – we have an experienced team at this age group and we have half a dozen Club NI representatives who have played against some big teams over the years.

“This is an incredible opportunity for our lads and we really can’t wait for the big kick off.”

The Shamrock Park youngsters had been exploring opportunities across Europe for a summer footballing experience but Porter said once the opportunity arose to represent the club and indeed the local area at the Super Cup NI, it was an easy decision to make.

“It was an easy decision for the club and there has been a real buzz about the club ever since the draw. We have a lot of players at the club at all levels who have played in the competition and it generates a lot of interest in Portadown and the surrounding areas.

“There is always a good representation on the Junior and Premier County Armagh teams and people enjoy going up there and supporting the county for the week.

“This is an amazing opportunity for our young players to get a taste of the tournament early on in their careers and our hope is that they will thrive at it and enjoy the experience and go back wanting more when they move up to the County age groups.”

Portadown have been long standing friends of the competition and back in 2012 the club hosted CSKA Moscow and Tottenham Hotspur as part of the 30th anniversary celebrations where the county sides played host to world class opposition.

Porter added that it has been another busy season for the County Armagh outfit, but said that his players will recharge the batteries for a few weeks before finalising preparations for the competition.

“It has been a very busy season for us and we have had a small but dedicated squad of around 14 players and we have put development first and making sure we play the right way. The boys have really shone this season and full credit to them.

“We started off with the Mourne Cup back in July last year and we will finish our season next Monday evening.

“It has been a long season and the boys and the coaches need a break. We will back in around June 12 and we have a detailed schedule planned with games against good opposition in the Republic of Ireland and in NI.”

Porter said that the players and club representatives were incredibly impressed with the facilities and opportunities available at Ulster University, where all of the Minor teams will be based and play their matches from July 23-27.

“The tour of the University really opened our eyes and everything is absolutely fantastic from the leisure facilities, the pitches, the accommodation and the meals available for the squads.

“It will be brilliant for all the teams and coaches to mingle and get to know each other and it is going to be an unbelievable experience for our young players.

“Playing at a competition of this stature is something that our players and indeed the club won’t ever forget, and in years to come it will give them something to talk about and remember the time they played in the Super Cup NI for Portadown.”