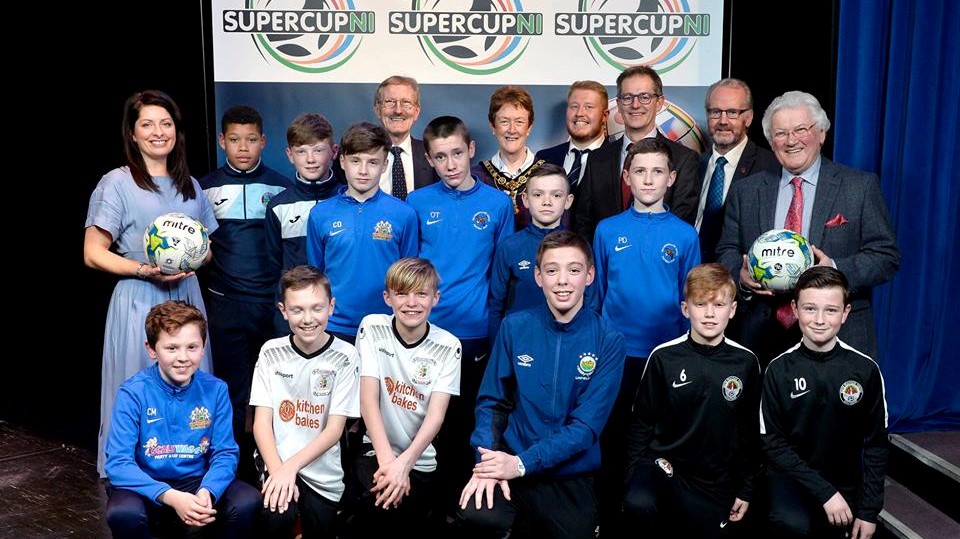 Dungannon United Youth will be hoping that the senior side’s success in the NIFL League Cup will inspire their U13 charges to Super Cup NI success this July.

And their Minor Cup side won’t need to look too far for inspiration as first team manager Rodney McAree will be joined in the dug out by Dixie Robinson and Mel Somerville.

Speaking to the SuperCupNI following the Minor draw, Robinson said it has been a year to remember for everyone at the South Tyrone club.

“To win our first ever senior trophy was incredible and it has been a super year for everyone at the club. I think it makes just a big difference at youth level when you can sell the club as one that isn’t afraid to bring youth players through the ranks into the first team.

“A lot of the boys in the 2005 team go week in week out to the games and do ball boy at home games. They have a great affiliation with the club and we are hoping that they go up to Coleraine and enjoy every moment.”

Indeed Dungannon’s U13s enjoyed their own little bit of success this season as they finished top of the pile in the National Youth League in what was a very competitive and talented league.

The Tyrone outfit were the last ever Northern Irish club side to enjoy success at the competition, back in 1989 when a certain Rodney McAree lined up alongside former Northern Ireland winger Keith Gillespie.

“It will be 30 years ago next summer that we won the U14 section and it is amazing that 29 years later Rodney is in the dug out leading our U13s as we make our return to the competition.

“When the opportunity arose to enter it was a no brainer and we put ourselves forward immediately.”

Robinson said it is a dream come true for their youngsters to test themselves against some of West Ham’s future stars.

“It is fantastic for our club and the boys to have this sort of opportunity and you always want to go to competitions and play top quality teams and the Super Cup will certainly provide us with that this summer.”

Robinson said that he firmly believes that the new Minor section will be a huge hit this July.

“I always say that familiarity is a great thing and it will help our boys settle a bit quicker knowing that they are staying and playing with the players they have played with all season.

“Hopefully introducing our young players to this sort of environment will have benefits for not only our club but the county setups as we go forward.”

It certainly promises to be a busy couple of weeks for the Tyrone side and Robinson said that their 18 man squad are eagerly awaiting the big kick off.

“We are training a few nights a week at present and have 5 to 6 games pencilled in ahead of the tournament.

“As a club we held a trial process for all eligible 2005 players across the club and we narrowed it down to the final 18.

“Rodney and myself have a plenty of experience of the tournament and we have told the boys right from the first training session to soak everything in and enjoy it.

“We are incredibly fortunate to have Rodney taking the lead in training and he has been excellent with the boys and ensuring they are ready for the tournament.

“It is fantastic for our club and indeed the U13 team to be part of it and playing in such a prestigious competition will be fantastic for the development of our players on and off the field.

“The countdown is on now for the parade and our first game and we can’t wait to get started!”