U13 Bertie Peacock Youths – ‘Proud to play our part!’ 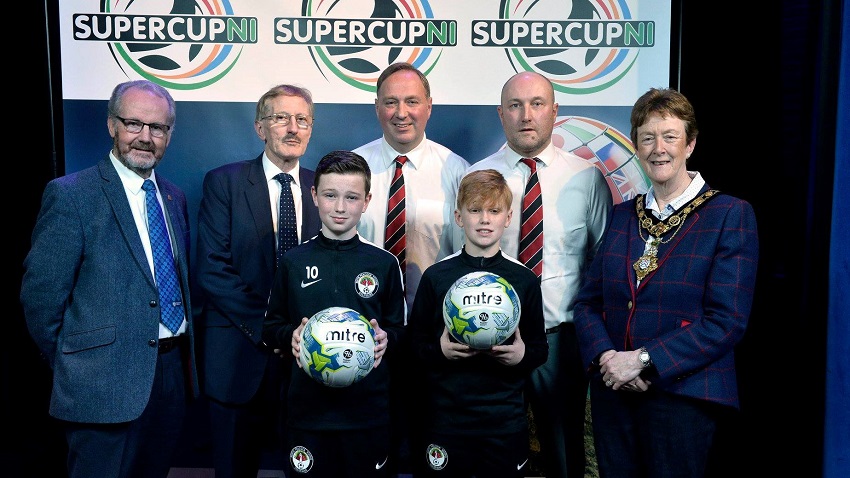 Twelve years after their formation one of Coleraine’s most popular football teams will make their debut at a competition synonymous with the man that their club is named after.

Bertie Peacock Youth Football Club were founded shortly after his untimely passing in 2004 and the local side will take their place in the newly established Minor section this July.

U13 manager Soren Stewart said it will be a proud moment for everyone involved in the club.

“Our club was named after the late great Bertie and we initially started off with just 2-3 teams. We have now expanded and offer football locally for young people aged between 5-18 years of age.

“Representing the club and playing with Bertie’s name on our badge will be a privilege and an honour at the competition that he founded back in 1983.

Stewart admitted that his side aren’t there to simply make up the numbers and indeed their U13 sides are one of the most talented in Northern Ireland, having picked up the NIBFA Cup on May Day against Ballinamallard United.

“Our 2005 boys are capable of competing with the very best and we are right up there with the top teams in Northern Ireland. We have had a few setbacks on the way and our young goalkeeper Conor had an unfortunate accident and will miss the tournament, but we are very optimistic we can go and do ourselves and the club proud.”

The hometown side will take their place in Group B with Ballinamallard, Greenisland and Reeds FC from India and Stewart said it is an exciting group to be involved in.

“I think Reeds are the first ever club side from India to come over to the competition and they will be a bit of an unknown entity. Greenisland and Ballinamallard are two top sides as well and we will be focused on all three games and see where it takes us.”

“A lot of the players at our club would be fervent supporters of the competition and go along and watch all of the teams. It will be an incredible privilege for them to play in such a prestigious tournament and have that home support behind them.

“We would have played a lot of games at the University over the years and we will be playing in familiar surroundings and some of the boys in our team will probably be able to see their house from where the games take place!

“Hopefully that familiarity and home support will give us an edge throughout the week.”

The local side will join the likes of West Ham United, St Johnstone and Irish League giants Linfield, Glenavon and Glentoran in the Minor section and Stewart said they are proud to take their place in the competition.

“I think when we attended the draw it really hit home to us how far we have come. We believe we can compete with the best and represent the club to the best of our ability.

“The U13 section is a fantastic addition to the tournament and it will give our players a chance to show people what they can do from an early age.

“In years gone by our players would have had to wait to trial for the county teams at U15 and U17, but it is a fantastic opportunity for them to get some exposure to the competition early on in their footballing careers.”

With just under two months until the big kick off Stewart said everyone at the club is excited about another exciting summer of football.

“We’ve a strong squad of 18 selected and we are in the middle of an end of season break at present. Once we start up again we will gradually build up our preparations and we will be ready for five games in five days.

“I’m just back from a competition in Limerick, where teams played 3 games in one day and it was probably too much!

“We will prepare as best as we can and use the facilities at the university to aid our recovery and take the boys to the sea to help ease the aches and pains!

“It is an exciting time for the club and we are proud to be able to represent Bertie and take our place amongst some very esteemed company at the Super Cup NI!”