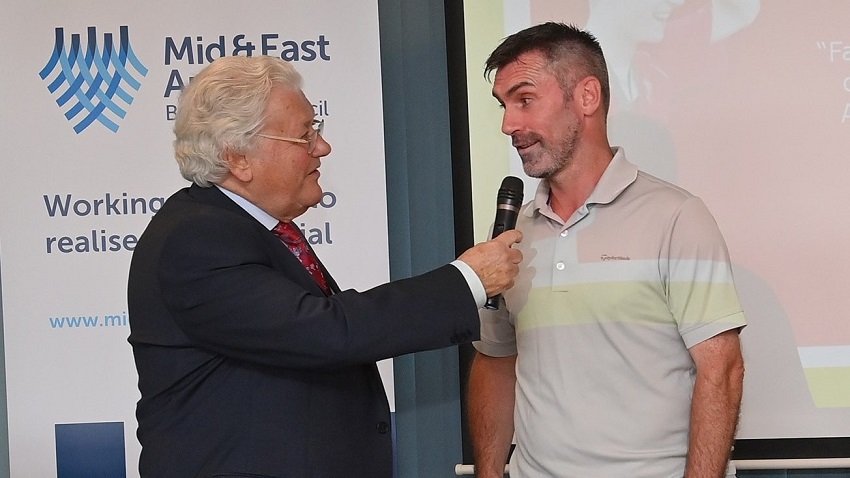 The parade and opening ceremony of the 2022 STATSports SuperCupNI will see hundreds of aspiring young footballers hoping to follow in the footsteps of the guest of honour.

Former Manchester United, Newcastle United and Northern Ireland international Keith Gillespie claimed top honours in the U16 tournament back in 1991 as Manchester United defeated Heart of Midlothian in the decider.

One year later that team went on to secure the English Youth Cup and the class of 1992 was born!

Gillespie’s teammates on that evening included household names, David Beckham, Paul Scholes, Nicky Butt and Robbie Savage. Gillespie had further individual success back in 1991 when he was named Player of the Tournament.

Gillespie went on to become a regular in the English Premier League and earned 86 caps for Northern Ireland.

Chairman Victor Leonard said they were delighted to welcome the Bangor native back to Coleraine to launch the 2022 tournament.

“Keith has been a big supporter of the tournament in the past and he attended our launch night in Ballymena in 2017.

“He is proof that the tournament can provide a launchpad for young players from Northern Ireland to go and make a career for themselves across the water.”

Leonard paid tribute to everyone involved in organising the tournament this summer and said everyone was eagerly awaiting the first match on Monday 25th July.

“It has been a difficult few years for everyone and we have worked tirelessly in the background to deliver our first fully functioning tournament since 2019.
“We are delighted with the quality of the teams we have managed to attract and we have no doubt that it will be a memorable week for everyone.”

The 2022 event will take place from Sunday 24th July to Friday 29th July. On Sunday 24th July  the traditional parade through Coleraine starting at 7:00 pm at The Diamond and proceeding to Coleraine Showgrounds for the Welcoming Ceremony which commences at 7:45 pm.

The Tournament continues for the rest of the week and on Finals Day, Friday 29th July the following finals take place; the Minor Final at 10:30 am, the Youth Final at 1:30pm take place at Coleraine Showgrounds.  The Final of the Girls Tournament takes place at Dixon Park in Ballyclare at 2:00pm and at Ballymena the Junior Final kicks off at 6pm and the Premier Final has an 8:00 pm kick off bringing an exciting week of football to a conclusion.

The tournament takes place at seventeen venues across the three local Council areas of Causeway Coast and Glens, Mid and East Antrim and Antrim and Newtownabbey.

Keith Gillespie (front row, second from the left) was part of the 1991 winning Manchester United side