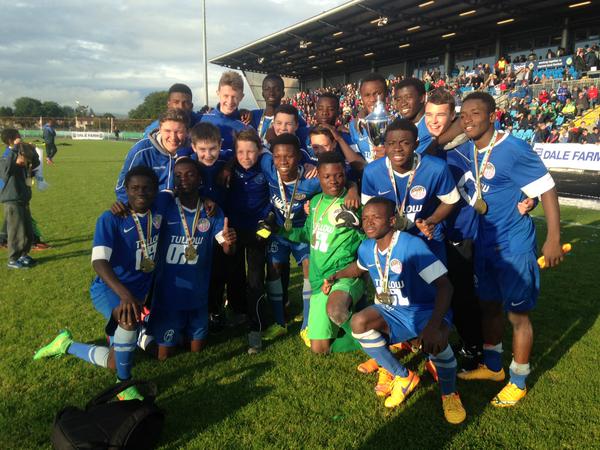 Following three days of football and 74 group stage fixtures, the final four semi-finalists are now known for this year’s Super Cup NI Junior and Premier Sections. Here’s a quick rundown of who the eight teams are, and how they have negotiated their way to the Cup semi-finals.

Right to Dream are the current Junior Section holders, having burst onto the scene with a 6-0 demolition of Southampton in last year’s showpiece final. The side are based out of a fully residential academy in Ghana, West Africa with approximately 90 boys and girls there. Over the years many Right to Dream graduates have went on to become professionals in Europe, with others obtaining scholarships to schools and colleges in the USA and England. The African side have yet to concede a goal in this year’s competition.

Right to Dream will be taking on Chivas Guadalajara, the Mexican side who have been on rampaging form throughout the group stages, averaging 5 goals a game and conceding just one so far. It’s no surprise though given the club’s pedigree. Playing in Mexico’s First Division with 11 titles to their name, the club has launched the careers of many international stars including Javier Hernandez, Carlos Vela and Carlos Salcido.

The Blades have a long-established Academy that has an impressive list of alumni including current Premier League stars Kyle Walker and Phil Jagielka. Whilst the first team have spent plenty of time in the top flight of English football in their 127-year history, they currently compete in League One, the third tier of English football. Sheffield Utd have also brought their shooting boots to the tournament, with 13 goals in just 3 group matches.

One of the host sides of the tournament, Londonderry are sure to be a popular semi-finalist, though they were forced to work hard for their place following an opening day draw. Ollie Mullan’s men side will be looking to build on their Day 2 and 3 wins against sides from Chile and New Zealand to book themselves a place in the Super Cup NI final on Friday night. Famous names from Londonderry’s previous tournament squads include Sammy Morrow, Darron Gibson and Paddy McCourt.

Hibernian, or Hibs as they are commonly known, are based in the Scottish capital of Edinburgh where they enjoy a long rivalry with Heart of Midlothian. Ex-Northern Ireland international Neil Lennon was recently appointed manager at the club, whose first team currently play in the Scottish second tier. The club were founded in 1875, and have been regular participants in the tournament. This year’s crop have proved extremely difficult to breakdown, with zero goals conceded in over 200 minutes.

O’Higgins are a professional side based out of Rancagua, a city in the middle of Chile. The Irish slant on the South American side’s name results from the club’s original founder who had roots on the island. O’Higgins have been regular participants at the tournament in recent years, impressing plenty of spectators with their performances. Like Hibernian, the Chileans have yet to concede a goal at the 2016 Super Cup NI.

County Down are the second local team to make it to the semi-finals of this year’s Super Cup NI, and deservedly so on their performances to date, whilst the Junior Down side are also unbeaten in this year’s tournament. John Bailie will look to rally his troops for another tough fixture on Thursday night, with his side looking to follow in the footsteps of their predecessors such as Josh Magennis and Trevor Carson who have went on to make a career in the game.

With a list of past players including the likes of Chris Baird, Jonny Evans and Craig Cathcart to provide inspiration, the sky is the limit for this Antrim team.