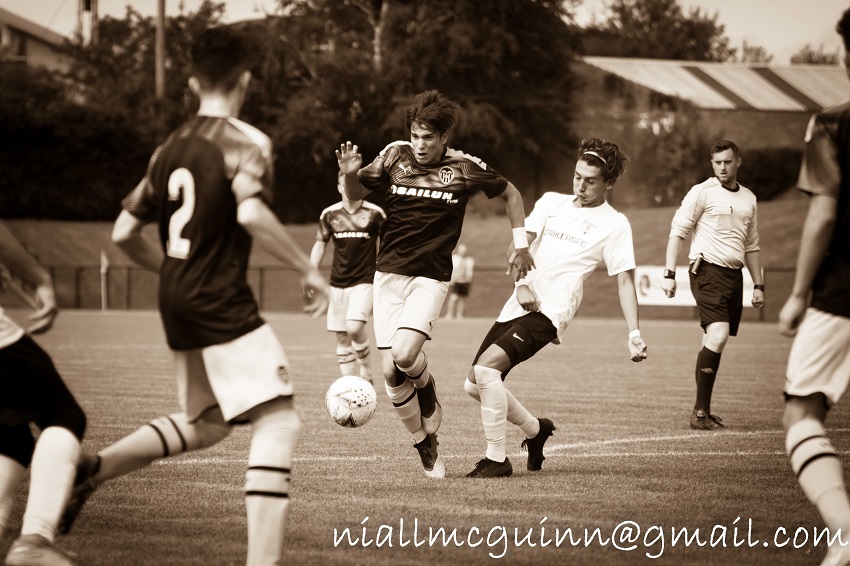 Sun pierced through the Limavady sky as Valencia and Strikers FC took to the field at Scroggy Road in the under 17’s Premier section on Wednesday afternoon.

It was one way traffic in the early exchanges, with Valencia setting their stall out like a heavyweight prizefighter looking to rattle their opponent from the start. The intensity of their play and their neat interchanges left Strikers chasing shadows, and after fifteen minutes it was a surprise that they only found themselves 2-0 up.

The quick footwork of Ferran Giner had resulted in a penalty for the Spaniards after ten minutes, which was duly dispatched by Ivan Muñoz. The same two players were centre stage again just four minutes later when a beautiful through-ball from Muñoz reached the feet of Giner who tucked it away with minimal fuss.

Valencia continued to press, but conceded against the run of play when Strikers’ Eduardo Exiga took advantage of a ricochet in the Valencia penalty box, reacting quickest to loft it over the goalkeeper into the net. Unfortunately for the American side, hopes of a comeback were dented on 25 minutes when an inswinging corner was powerfully headed home by the towering Cesar Tarrega.

Maybe the tropical temperature Limavady was basking in was making them feel at home, but the boys from Valencia refused to relent and got better as the game went on. Hugo Gonzalez, one of the game’s standout players, scored two goals in quick succession before half-time.

The first was a superb solo effort where he skipped past two of the Strikers team and finished low to the left, and the second was dinked over the advancing keeper after a selfless assist inside the box from Giner. Stepping out after half-time 5-1 down, it would have been easy for Strikers to drop their heads and lose heart in the face of their brilliant opponents.

But they deserve huge credit for the resolve and tenacity they showed in staying so competitive up until the final whistle. Even when Giner rolled away from his man in the blink of an eye and stroked home his second and Valencia’s sixth on 37 minutes, the boys from California were eager to get the game restarted and keep on fighting.

There is no doubting that Valencia are a supremely gifted technical side, and this was demonstrated by countless clever passages of play for the remainder of the match. Wave after wave of attack was launched, and if it wasn’t for the brilliant shot-stopping of the Strikers’ goalkeeper the Valencia tally could easily have ended up in double figures.

There was still time for one more goal though, and it was the pick of the bunch. The pacey David Ruiz bombed forward from the left flank and played a slick one-two before hammering home an arrowed drive into the far corner. 7-1 was the final score, and fans of both sides stood to applaud the dazzling array of talent they had witnessed. On this evidence, it’s going to be hard to look past the boys from Valencia as favourites for lifting the Premier Section trophy on Friday night.