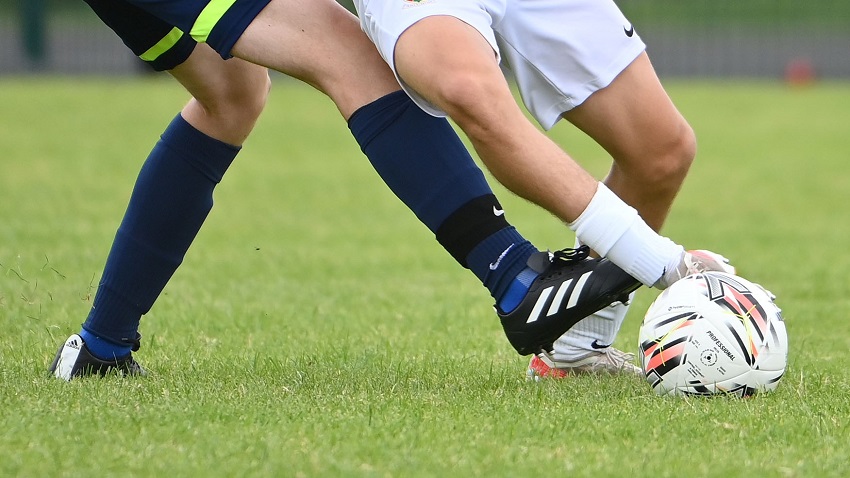 MK Dons have had a terrific tournament so far and that continued in Castlerock as goals from Joshua Clark-Anderson, Rian Silver, Michael Brammeld and goalkeeper Sebastien Stacey helped them seal a 4-1 victory.

Leeds United did get a goal back in injury time but were ultimately beaten by the better side.

The first ten minutes were very evenly matched as each team tried to feel each other out.

The first chance fell to MK Dons’ Rian Silver who ran away from his defender but lacked the power in the shot to test Owen Grainger in the Leeds United net.

In the 13th minute Leeds had their first chance of the game as Finlay Gorman put in a teasing delivery but Luke Alker couldn’t connect enough with the ball to test the keeper.

Callum Tripp was having another impressive match and in the 15th minute he tested Owen Grainger from a free-kick but the keeper was equal to the shot, which bent around the wall.

Tripp then decided to take the game by the scruff of it’s neck as he received the ball from his keeper and drove from his own box straight through the heart of the pitch before sending Joshua Clark-Anderson through on goal.

After that length of the pitch drive by Tripp the right wing back had to finish, and he delivered sliding the ball underneath Owen Grainger’s legs to give the Dons the lead.

After missing two earlier chances, Rian Silver made no mistake with the third as he expertly turned in the box and placed the ball into the bottom corner.

Leeds still had their chances in the first-half but Sebastien Stacey was in inspired form as he reacted well in the 30th minute when Harry Gray got another touch to a goal bound shot.  MK Dons took a two goal advantage into the break but the game was still up for grabs as Leeds had the ability to come back from the deficit.

The Leeds coaches made multiple changes at the break and this seemed to breath new life into their team as they started the second-half on the front foot.

Substitute Devon Brockie, should have got one back for the Yorkshire side after Harry Gray cut the ball back to him but the number 10 shot straight at Sebastien Stacey.

In the 47th minute the game should have been put out of Leeds’ reach but Edwin Daffern with only the keeper to beat shot straight at the Owen Grainger from 10 yards.

Devon Brockie made a difference when he came on at half-time making countless runs and he once again tested Sebastien Stacey in the 50th minute but the keeper was determined to keep a clean sheet.

The game ended in bizarre and chaotic fashion starting with a third goal for MK Dons as Michael Brammeld rounded the keeper after being set free on the break.

Further into stoppage time MK Dons had a free kick on the edge of their box.

Sebastien Stacey stepped up to take it and he when he looked up the pitch he could see that opposite keeper, Owen Grainger, was well off his line.

Stacey seen this opportunity and drove it up the field and to the amazement of the crowds the ball found the back of the net.

The madness didn’t stop there though because as the keeper celebrated with his team Leeds United quickly took the restart and scored into the empty net, which Stacey had vacated.

Despite those late minutes of madness Mk Dons progress to the Super Cup NI Junior section Globe Final where they will meet County Down after they defeated County Londonderry earlier.

After the game MK Dons coach, Ryan Simmonds spoke of his delight in his young teams performance considering the level of opposition.
He said: “Whenever you beat a Premier League team it’s always good and I thought the boys were very good today in bits.”

When asked about his teams unbeaten record against Premier League sides in the tournament he said: “We are trying to relish the underdog in us and we probably should have beat United.  We’re MK Dons but we think we have a unique style of play and we hope we are showing that to the people of Northern Ireland.”

Simmonds confirmed that he believes Mackenzie Gray will be fit for the Globe Final tomorrow as it is only bruising.

This came after he left the field in the 60th minute after a rough challenge from a Leeds player.

MK Dons face County Down on Friday at 2pm at Anderson Park as they look to end the tournament on a high.

Leeds United will contest the 3rd place match of the Globe competition against County Londonderry at 2pm at Broughshane.