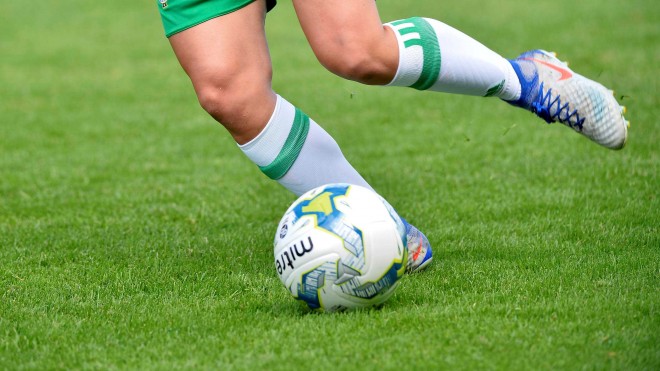 Linfield and Finn Harps both opened their Minor campaign with victories on day one and both sides went into Tuesday morning’s clash optimistic of pushing ahead and reaching the final four.

The match itself was the proverbial game of two halves with Linfield bossing the first half and the Donegal outfit controlling the second period of the game.

In the end, the two sides had to settle for a share of the spoils at a sun kissed Parker Avenue as the game finished 2-2.

Linfield started strongly and tricky winger Gary McComb was making inroads on the right hand side and it was on this very side that they took the lead. Zach White found himself with time and space and his deep delivery into the box deceived the Harps’ keeper Noah Boyle and nestled into the top of the net.

Linfield were firmly on top but Harps were slowly but surely finding a way into the game and Finn Folan could have levelled the scores only for an important block by the influential Rhys Davidson after good work down the right.

Whatever was said in the dressing room of the Ballybofey outfit seemed to spark the Donegal outfit into life and their number 22 stole the ball from the Linfield centre half inside the box and fired low and hard at the goal and his shot squeezed between the legs of the Linfield ‘keeper to level the scores.

Linfield were next to go close with Davidson going close but his shot lacked power and was easily saved by Boyle.

Harps were soon ahead for the first time in the tie with 50 minutes on the clock. Their number 22 slotted home after a long range effort was parried by Max Sykes.

Linfield knew time was running out and a great cross from the left hand side was headed home by Sonny Trainor to draw the teams level once again.

Linfield had a late chance to take all three points when Zach Cowan saw his header just drift wide of the upright after a great cross from Trainor.

The game was soon over and Harps and Linfield will be hopeful of progressing to the final four. Harps face Larne in Ahoghill while Linfield take on Coleraine at Inver Park.