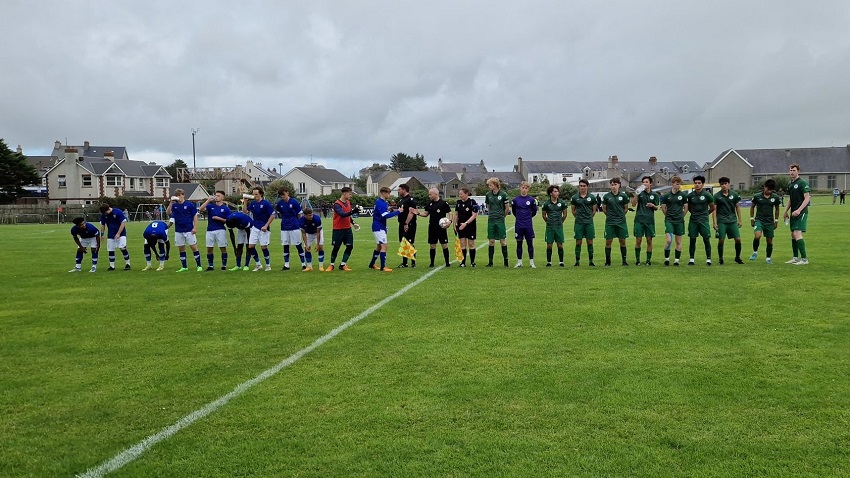 Ipswich Town make a strong start to the Premier section of the Super Cup NI by defeating American side San Francisco Glens 2-0 in commanding fashion.

The East Anglian side picked up all three points in Castlerock thanks to goals from Paul Moodie and Nico Valentine.

San Francisco Glens were ultimately beat by the better team but will take heart from the fact they kept the English side quiet after the 11th minute.

It was a lightning quick start to the match as Ipswich won a penalty within the first minute after Gerrard Buabo was brought down in the corner of the box after a great header on from striker, Ash Boatswain.

The Tractor Boys captain Paul Moodie, stepped up to take the resulting penalty and calmly slotted it home to the keepers left.

The early domination continued from the side in blue as they won a free-kick 25 yards out which had to be tipped over by the Glens keeper Lucas Jones.

It wasn’t long though until the English side, making their debut in the tournament, grabbed a second.

After a great passing sequence on the break Finley Barbrook found Nico Valentine in acres of space in the box and he swept the ball home passed the despairing keeper.

Ipswich continued to be the dominant side as San Francisco Glens struggled to get any foot hold in the game.

Gerrard Buabo was having a lot of success on the right hand side and another one of his runs created a chance for Finley Barbrook but the midfielder’s shot was saved well by Lucas Jones.

After the break though Ipswich seemed to settle for the result as they made changes with later games in mind.

The Glens though grew into the game in the second-half and had their first big chance when captain, Matthew Duggan met a long throw in by Xavier Van Loben Sells but it was blocked before it could test Danny Cullum in the Ipswich net.

In the 50th minute a lot of fans were disgruntled as they thought Ash Boatswain should have received a different colour card to a yellow after he elbowed a Glens player when rising for a header.

There was further late chances for Ipswich through Nico Valentine, who was within inches of grabbing his second of the day, and substitute Afi Adebayo but ultimately they had to settle for just the two goals.

San Francisco Glens manager Mike McNeill was still hopeful for the rest of the tournament despite the result, after his side’s second-half performance.
He said: “The second-half showed that we can still compete and we played much much better in the second-half.”

Looking ahead at Tuesday’s match against IDA Bermuda McNeill added: “I think the second-half is the team we want to be and if we can play like we did in the second-half then I’m confident that we will be to get a result tomorrow.”

Next up for Ipswich Town will be local side County Fermanagh at Broughshane, which is a six o’clock kick-off.

As earlier mentioned San Francisco Glens will be looking to bounce back In Ahoghill as they face Caribbean side IDA Bermuda at 5 o’clock.