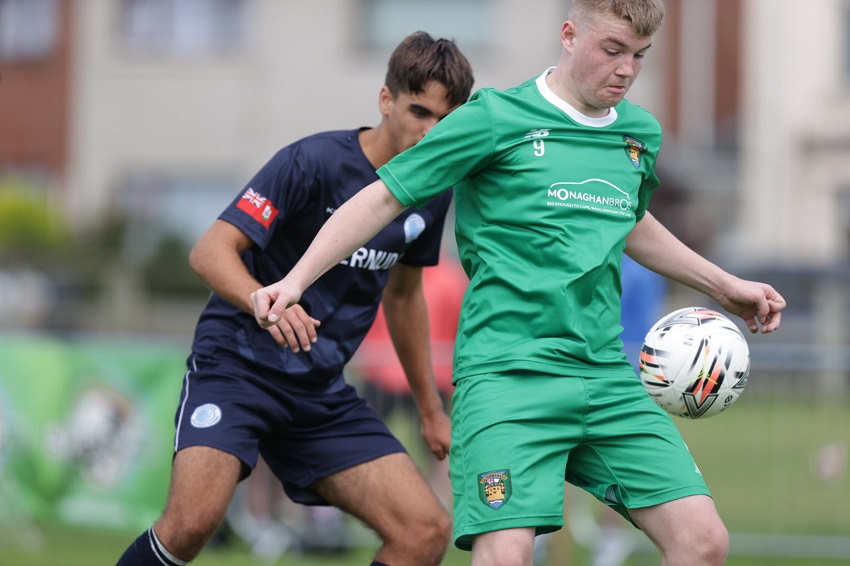 County Fermanagh’s Juniors got their STATSports SuperCupNI campaign underway with a thrilling second half comeback to take all three points in a 3-2 win against IDA Bermuda at a blustery Warren Recreational Grounds in Portstewart on day one.

It was the visitors from the Caribbean who made the stronger start and their number 9 Chance Eve made some progress down the wing and his cut back was flashed towards goal by Paris Robinson, who saw his strike parried over by Calvin Brown.

The Bermudans nearly grabbed the lead with a long range free kick from Xahvi Robinson, but his effort flashed wide of the post.

IDA finally grabbed the lead with 20 minutes played when a short corner saw Enoch Joseph drift past three tackles before driving the ball into the net.

The blustery conditions left both sides struggling to play much free flowing football but Fermanagh adapted better to the conditions in the second half. They made the ideal start when skipper Dylan Boyle collected a loose ball and unleashed a rocket towards goal from 30 yards. His effort had the keeper well beaten, but it hammered off the post but fortunately for Fermanagh the ball ricocheted off goalkeeper Keyan Webb’s back and into the net.

IDA responded well and with 45 minutes on the clock they were ahead once again. Some sloppy play in the middle of the park was punished by Chance Eve who skipped past some last ditch Fermanagh defending before calmly finding the right hand corner of the net.

However, their lead was short lived as just 8 minutes later Fermanagh were back level. A wonderful delivery from a central free-kick was nodded home at the back post by Jack Beatty.

The game was becoming more and more frantic with both teams firmly believing they could get all three points.

Chance Eve nearly grabbed his second as he swivelled on the 18 yard box but his wonderful effort hammered off the bar. With just 8 minutes left, Fermanagh took the lead for the first time. A short throw found the feet of the impressive Dylan Boyle and his looping cross wasn’t dealt with by the Bermuda defence and despite stumbling initially Ethan Abercromie fired home at the second attempt to cap off an impressive second half from the Lakeland County.