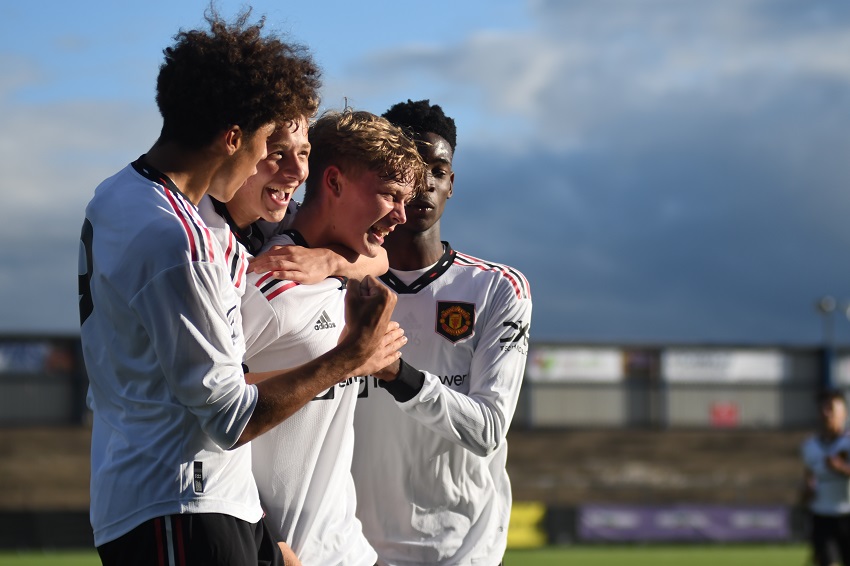 Manchester United make it two wins from two as they down a spirited County Fermanagh side.

The young Red Devils backed up their opening day win against Surf Select in the junior section thanks to a free-kick goal from playmaker, Adam Berry on the stroke of half-time.

This doesn’t tell the whole story though as County Fermanagh had a goal-bound shot cleared off the line in the final minute.

United were dominant in the early proceedings with Fermanagh goalkeeper, Calvin Brown called into action three times in the opening 10 minutes denying Luke McAnespy and Victor Aigbomian Musa in the process.

This pressure continued to build as the first-half wore on with Brown having to make a smart save after the Reds executed a training ground free kick in the 17th minute.

The highlight of the half though for the young keeper will have been his magnificent reaction save after Finley McAllister’s long range shot took a late deflection.

The keeper however couldn’t keep midfielder Adam Berry’s free kick in the 35th minute out as it deflected off the side of the wall and into the keeper’s bottom left corner.

Considering the dominance Manchester United had in the opening 35 minutes, Fermanagh would have been quite happy only going in a goal down at half-time.

Manchester United didn’t create the same amount of threatening actions in the second-half as substitutions seemed to foil their rhythm as the game wore on.

This wasn’t the case though for Fermanagh as they began to believe they could snatch a draw the longer the game remained at 1-0.

In the last five minutes of normal time the Northern Irish side started to build pressure on their English counterparts, winning throw-ins and free-kicks in dangerous areas.

This late pressure culminated in a last minute scramble in the Man United box which saw the ball cleared off the line as Fermanagh thought they grabbed a historic draw against the Red Devils.

Ultimately it was star man Adam Berry’s free kick which separated the sides but the Fermanagh side showed great spirit and character all night against their Premier League opponents.

This commitment was appreciated by the crowd at Coleraine Showgrounds as they clapped and cheered the boys in green off the pitch.

Manchester United will be looking to stay unbeaten on Wednesday as they play fellow English side MK Dons in Broughshane at four o’clock.

County Fermanagh on the other hand will be looking to get back to winning ways as they play County Londonderry in an all Northern Irish affair at Anderson Park at four o’clock.