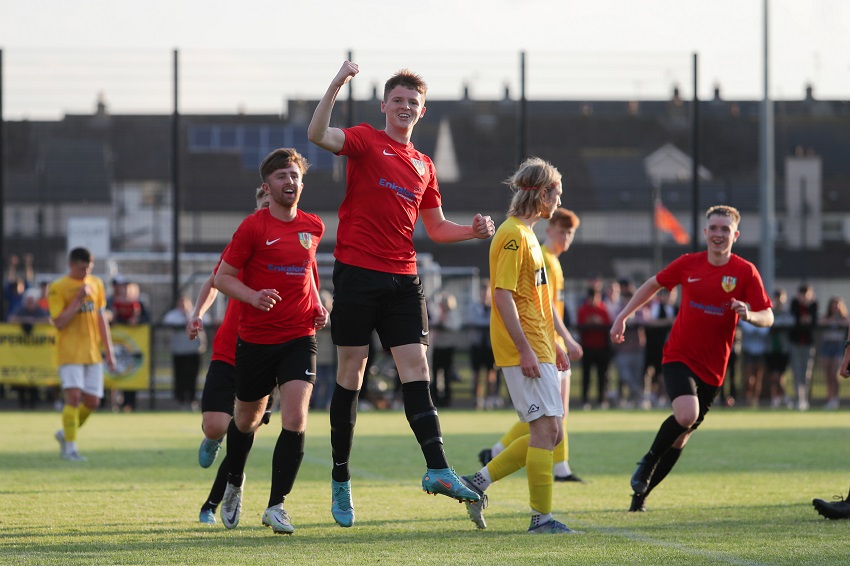 County Antrim booked their place in the SuperCupNI Premier final after a convincing semi-final win over county rivals Londonderry.

Antrim will play in the showpiece final on Friday at Ballymena Showgrounds thanks to goals from Michael Morgan, Sean Moore, Luca McGreevey and Aaron Prendergast.

Londonderry came into the match unbeaten but after the quickfire double by Antrim in the first-half they never looked like winning.

Antrim took control of the game early on creating chances and piling pressure on Londonderry’s back five.

Sean Moore kept finding space on the right in the opening twenty minutes and was a nuisance all half for the Londonderry defence.

The first chance of the game though came for Londonderry striker, Kirk McLaughlin who couldn’t connect properly to the ball on the volley after it fell to him from a free-kick.

Antrim took the lead in the 27th minute thanks to Michael Morgan who put the finishing touches to a good team move.

The ball was played over the top to Jack Montgomery who expertly headed it across the goal to his striker, who buried the guilt edge chance to give Antrim a first-half lead.

Two minutes later Antrim had a second, as Sean Moore got himself onto the scoresheet.

As Londonderry pushed forward they left space in behind which Sean Moore exploited.

The number eight was found perfectly by Ethan Simpson and the right winger did the rest, calming himself before placing it with his left foot past the onrushing goalkeeper.

Londonderry came out more attacking in the second half as they pushed for a goal back but this left opportunities on the break for Antrim.

In the 42nd minute Conor Henry, the Londonderry keeper, kept his county in the match with a phenomenal save to stop Michael Morgan grabbing a brace.

The second-half was slowed down by County Antrim who were content with holding onto their two goal lead.

Midway through the second-half, Aaron Prendergast was substituted on and he brought immediate energy to the game.

He had a shot saved in the 60th minute but minutes later he went on a terrific run to get to the by-line before he picked out Luca McGreevey who powered home from 10 yards for Antrim’s third of the match.

In the 67th minute County Antrim were awarded a penalty after a shove in the box.

Prendergast stepped up and converted, magnificently finding the top corner of the net.

The Antrim coaching team will have a difficult decision in terms of team selection after Prendergast’s cameo performance.

The match ended 0-4 as Londonderry suffered their first defeat of the tournament against a very good Antrim side.

He said: “It was just a step too far for them tonight, come up against a strong Antrim team and we just couldn’t get over the line and wish them well in the final tomorrow.”

Smith says it will be “difficult” to get his side back up for the 3rd place match tomorrow against Club Puebla but says they will just “lick their wounds and get on with it”.

County Londonderry will play their 3rd place match against Club Puebla at Coleraine Showgrounds on Friday with kick-off at 16:30pm.

County Antrim on the other hand have a Premier Section final to look forward to on Friday against English side Ipswich Town.

That Premier final will kick-off at 8pm at Ballymena Showgrounds.