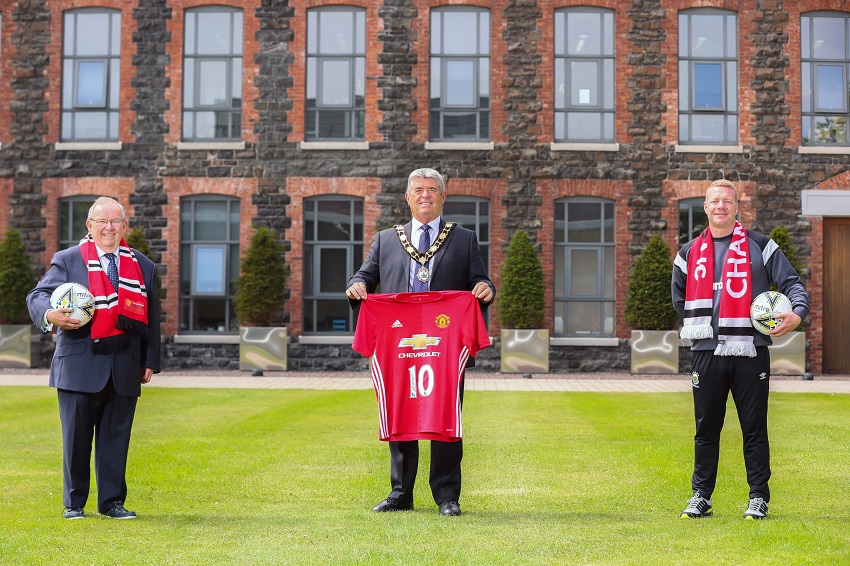 It came as a great disappointment that the STATSports SuperCupNI Tournament had to be cancelled for a second year. Organisers had been really busy putting together a strong field of 50 teams to stage a UK and Ireland event but due to the ever-changing nature of the virus, organisers had to admit defeat in April and cancel the usual format of the Tournament.

Discussions within the Organising Committee took place to see if anything could be staged, which would keep SuperCupNI uppermost in people’s minds. Soon the idea of staging a number of games during what would have been the week of the Tournament began to take shape.

The final game of Manchester United’s tour will take place next Friday on 30th July at Dixon Park, which will be United’s first visit to Ballyclare. Manchester United of course signed local Ballyclare lad and Northern Ireland International, Patrick McNair who played for the first team at Old Trafford. United’s opponents will be one of the Academy teams from Irish League Champions, Linfield FC. Manager David Healy has put great emphasis on developing young players in their Academy and this will be a great opportunity for the young Linfield team to play against one of the foremost teams from the English Premier League.

The Mayor of Antrim and Newtownabbey, Alderman Billy Webb, said:
“Whilst it is disappointing the full schedule of events for SuperCupNI is unable to take place, it’s great that the organisers have been able to secure such a fantastic team to play against some of our local home-grown talent. We are looking forward to welcoming the squad to our Borough for their training session at our state-of-the-art football pitches at Allen Park and again when they take on Linfield in Ballyclare. Providing opportunities for young people to participate against Premiership teams demonstrates our commitment to the continued development of sporting talent within the Borough. We are proud to lend our support to this prestigious event and wish the organisers and players every success for a safe and enjoyable tour in Northern Ireland.”

As a result of the restrictions introduced by the Northern Ireland Executive, a limited number of spectators was allowed at each game. The tickets for all three games quickly sold out leaving many spectators disappointed.
Manchester United’s other two games are on Monday 26th July at Portstewart where the opponents are Coleraine FC and on 28th July at The Showgrounds Ballymena, when Ballymena United will provide the opposition.