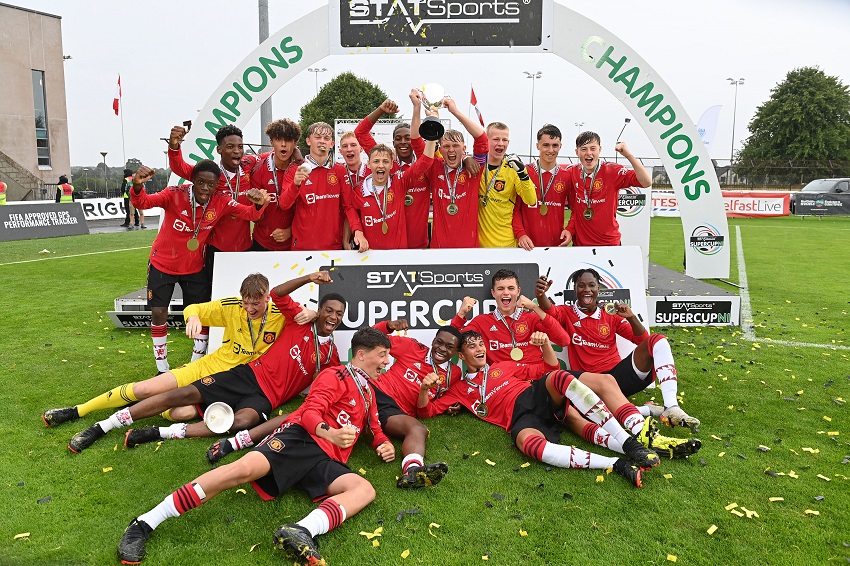 The young Red Devils beat their Scottish opponents to lift the trophy thanks to first-half goals from Shea Lacey and Harrison Parker.

Runners-up Rangers pressed in the second-half but couldn’t get past Man United’s resolute defence despite their best efforts.

The first chance of the game fell to Findlay Curtis, but in the box he shot straight at William Murdoch on the volley.

From a corner shortly after Rangers centre-back Niall Rogerson had the whole of Ballymena to himself but he headed well wide.

Manchester United got the first goal of the game through a penalty by Shea Lacey, who calmly slotted it home sending Mason Munn the wrong way.

The winger won the penalty himself due to his sharp feet drawing the foul from Bailey Rice in the box after a great pick out by Adam Berry in the build-up.

In the 25th minute Northern Irish goalkeeper, Mason Munn, made a phenomenal one handed save to keep out Adam Berry’s piledriver from the edge of the box after he was set by Shea Lacey.

From the resulting corner though Mason Munn couldn’t keep out Harrison Parker’s downward header from a Shea Lacey delivery as he parried it into his own net.

In first-half injury time Rangers’ substitute Callum Burnside had a free header from a free kick but directed it into the ground instead of on goal.

At half-time the young Red Devils were in complete control threatening to add more in the second-half.

Four minutes into the second half Paul Nsio for Rangers did well to win the ball back high up the field before finding Callum Burnside in the box but he blazed well over.

In the 43rd minute Manchester United should have extended their lead as Amir Ibragimov had a free header from three yards out from a Adam Berry corner but he failed to get the correct contact on the delivery.

Just before the 50th minute mark United broke with pace after Shea Lacey stole the ball off Cameron Scott before playing Ethan Wheatley in on goal but a poor first touch by the striker meant Rangers defenders could get back to block.

Minutes later Rangers went forward down the right with Alexander Hutton who got to the by line before pulling it back to Archie Stevens who looked to have shot on goal but Man United captain, Finley McAllister made a vital block.

As frustration grew for Rangers Bailey Rice decided to have a crack from 30 yards but William Murdock came up with a save to tip it around the post.

Ethan Wheatley was growing into the game at this point as he and Adam Berry combined for a neat one two to send the striker away but the striker didn’t put enough on his shot to beat Mason Munn.

Cameron Campbell’s youngsters pressed in the dying embers of the match with chances for Callum Burnside and Archie Stevens, but couldn’t find a way through as they came runners-up of the Junior section of the tournament.

Manchester United end the tournament as champions with four wins and a draw to their name in a very impressive tour.