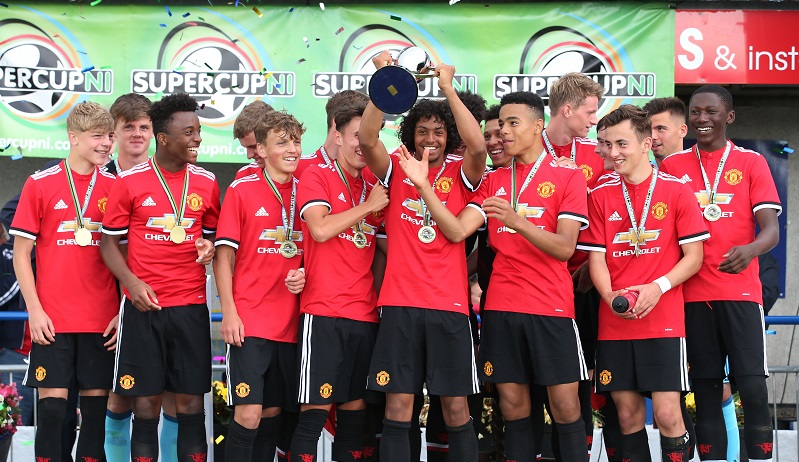 An eighth minute strike from Swiss youth international Nishan Burkart was enough to seal victory for his side over a strong Northern Ireland u’18 team.

Northern Ireland began the game at a frantic pace, pressing hard in an attempt to disrupt their opponents passing game. However it wasn’t long before the English side had their first chance of the game.

A driving run from full back Brendan William brought his side into the final third, some dazzling footwork from Mason Greenwood. Greenwood’s clever dink to the back post was met by the head of Millen Barrs who failed to work the keeper.

The Reds would have their breakthrough in the eighth minute a cutting through ball from captain Callum Whelan found the run of Nishan Burkart who finished first time into the bottom left corner of the net to give his side the lead.

The United dominance would continue a dangerous free kick on the left hand side of the eighteen yard box just trailing wide at the very last minute.

For all of the leaders composure, Northern Ireland could of found themselves level after a back pass from Max Dunne almost caught out goalkeeper Theo Richardson. Richardson scrambled clearing the danger with a kick high up the field to safety.

This provided a springboard for the Green and White Army to build, settling down and knocking the ball around themselves. A slick passing move found the feet of Cormac Lawlor on the right wing, his effort sailed over the bar.

The international side maintained kept the pressure up, having real success pressing high up the pitch. They came agonisingly close to restoring parity on the twenty third minute, Bobby Burns spectacular effort from all of thirty yards cannoning back off, of the crossbar with the keeper beaten.

With half an hour played the Old Trafford men got their foot back on the ball showing real composure in possession under intense pressure. The vocal point of all attacks coming from the driving force of Brendan William.

As half time approached the ‘wee country’ were awarded a free in a dangerous area. The in-swinging cross from out on the right was met bravely by the head of Liam McKenna forcing a fine stop from the United keeper.

The Green Army pressed for the equaliser before half time, causing their opponents problems with crosses from wide. Daniel Reynolds fired an inviting low cross towards the penalty spot. The outstretched Eamonn Reynolds missing it by a matter of inches.

Ian Baraclough’s side began the second half where they left off, on the attack. Some fancy footwork from number ten Thomas Roscoe saw him bearing down on the United goal, Theo Robinson bravely diving at the feet of Roscoe to save a certain goal.

The attacking continued with Eamonn Scannell’s driving run down the wing forcing a corner kick. The resulting looping corner was cleared after a period of pinball in the eighteen yard box.

Kieran McKenna’s side had a chance to double their advantage on the fifty fifth minute. An intelligent dink from James Garner was imaginatively flicked wide by goal scorer Nishan Burkart.

With an hour on the clock McKenna opted to use his bench making a host of changes. All players entering the fray keen to make an impression to claim a starting berth with the season fast approaching.

It was the skill of Mason Greenwood which continued to shine though. The English youth international having the sizeable Coleraine crowd on the edge of their seats every time he was in possession. A series of roulettes, drag back and fancy flicks entertaining all sections of the crowd.

The fresh legs of the Premier League side began to show as substitute Di-Mani Bughail-Mellor tried attempted to thread through Burkart only for a superb sliding challenge from Liam McKenna.

As the men in green pushed for an equaliser Ryan Strain found himself one on one with Dis-Shan Bernard the latter putting in a crunching challenge typical of the hunger displayed from the young United substitutes.

The search for a leveller continued a first time ball from Bobby Burns full of quality raced across the box, no one on the other end to direct it goal words.

As the clock reached eighty seven minutes a period of aerial bombardment ensued. Theo Robinson rushed off his line to clear Ross Larkins high cross, missing the ball which fell to Daniel Reynolds who fired over the crossbar amongst a sea of bodies.

The referee’s whistle would sound not long after confirming a win for Kieran McKenna on his and his sides return to Northern Ireland and the SuperCupNI.