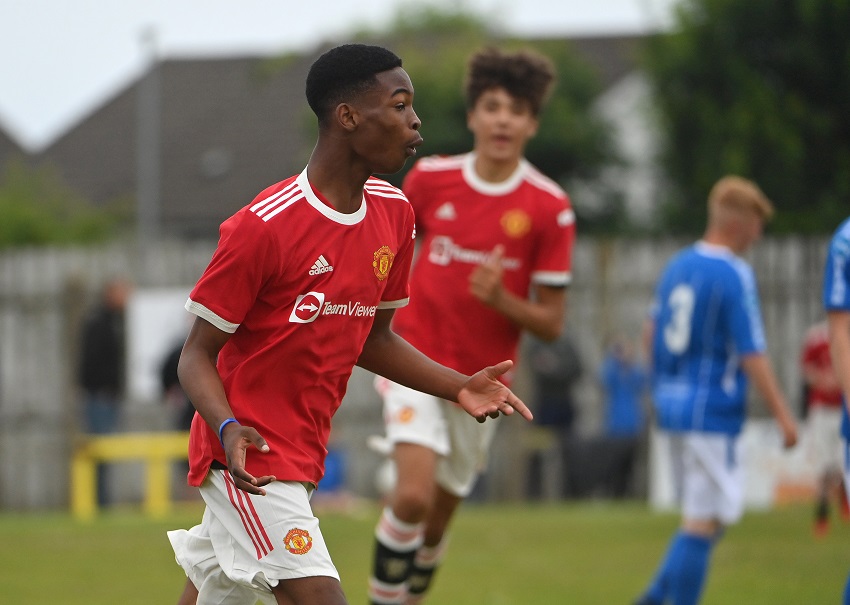 Manchester United’s Under-16s have beaten Coleraine 2-0 in a SuperCupNI Youth Challenge Match at Seahaven in Portstewart.

Coleraine were the better side in the second half but couldn’t find a goal despite some late pressure.

United’s youngsters have travelled to Northern Ireland to celebrate the 30th anniversary of the club’s famous Milk Cup win in 1991.

The Premier League side face Ballymena United at the Showgrounds on Wednesday before a final game against Linfield on Friday at Dixon Park.
United took the lead when forward Musa converted Jacob Devaney’s back-post cross on 16 minutes.

Coleraine kept United honest in the opening 40-minute half but the visitors doubled their advantage on 26 when Moorhouse’s free-kick deceived Conor Henry and bounced into the bottom corner.

Jack Elliott had an early chance for Coleraine, who again saw plenty of the ball and impressed after the restart, while forward Ethan Wheatley spurned two good chances to add to United’s total.

Henry again saved well from Amir Ibragimov and Coleraine came close to pulling a deserved goal back as Elliott and captain Bobby-Jack McAleese impressed against the English giants.

You can watch highlights of the game on the BBC Sport NI website.

Up next for Manchester United – a challenge game against Ballymena United at Ballymena Showgrounds on Wednesday 28th July.