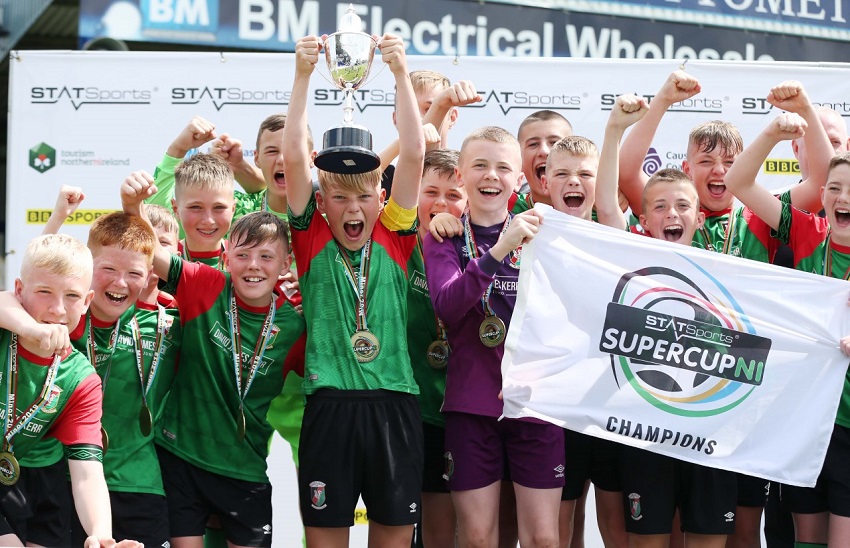 The STATSports SuperCupNI has a major success on its hands … with a Minor effort!

After the introduction of a new competition for players under 13, organisers of the international youth football tournament quickly realised they were on to a winner!

“The demand for places in an event at this age group made us aware that we were moving in the right direction for expanding our overall event,” says tournament chairman Victor Leonard.

This summer, the third version of the Minor competition will feature eight overseas teams instead of four, in addition to 12 from Northern Ireland.

“The feedback indicated that clubs felt they would benefit by having a stronger representation from outside Northern Ireland,” reveals Victor. “We have listened to that and decided to grow the Minor section in 2020.” The competition was initially launched at the Ulster University in Coleraine back in April 2018 and was primarily played on campus that summer, before branching out across the Mid and East Antrim Borough Council area and Causeway Coast and Glens Borough Council in the summer of 2019.

Hopes are certainly high that this summer’s competition can continue to build on the success of previous years.

Greenisland FC were the inaugural winners of the U13 crown back in July 2018, defeating hometown side Bertie Peacock Youth at the Coleraine Showgrounds.

The East Antrim outfit are one of a dozen challengers from the host country who will descend on the North Coast on Sunday, 2nd August, for the welcome parade and opening ceremony, before embarking on five exciting games in five days.

The 2019 champions Glentoran are back once again and will have high hopes that the class of 2020 can retain the trophy and bring it back to East Belfast.

City rivals Linfield have yet to taste STATSports SuperCupNI glory and they will hope to be in the mix in early August.

The Minor section this year will have two new Northern Irish entries, with St Oliver Plunkett from West Belfast and Oxford United Stars from the Maiden City making their bow.

St Oliver Plunkett are one of the biggest clubs in Belfast and over the years the likes of former Northern Irish internationals Jim Magilton, Mal Donaghy and Paul McVeigh have learned their trade with the Lenadoon based club.

Oxford United Star also have a rich history and Northern Ireland international left-back Daniel Lafferty is one of their most high profile graduates.

The action gets under way on Monday, August 3rdand finals in each of the three sections are pencilled in for Friday, August 7th.