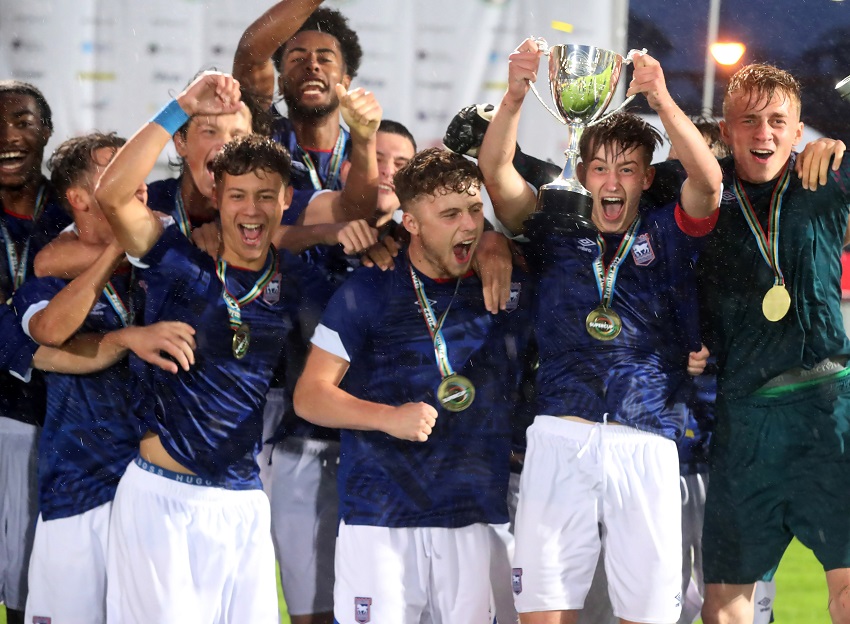 The English side went two goals up in the first-half before being pegged back to 2-2 thanks to a brace by County Antrim’s Sean Moore.

However, it wasn’t meant to be for Antrim as further goals from Jack Manly and Gerard Buabo settled the final in the second-half.

The first chance of the match fell to Ipswich Town as Finley Barbrook cut it back to a free Fin Steele, but he sliced it over.

Antrim went straight down the other end from the goal-kick as Sean Moore drove it just past the post from outside the box.

The chances kept coming in the opening minutes as Aidan Kelly nearly diverted a cross into his own goal but Orann Donnelly was alive to the danger and held the ball well.

Ipswich opened the scoring on eight minutes as winger Nico Valentine drove inside from the right touchline beating his defender with good feet before prodding it into the bottom corner with the aid of a slight deflection.

Antrim’s first big chance of the final fell to Michael Morgan who raced away from the last defender after Aidan Kelly played it in behind.

But the number nine couldn’t get it past Woody Williamson who came out quickly to close the gap and make the save.

The English side doubled their lead through Ben Haddoch who turned well in the box before using his left foot to find the bottom corner out of the reach of Orann Donnelly.

Nico Valentine was once more involved as it was his good feet that got him in the box to set Haddoch up.

On the 25th minute mark it was that man again Nico Valentine pulling the strings.

After losing the ball he luckily regathered in the box and tried to chip the keeper but Orann Donnelly stood up strong to make the save.

Sean Moore got Antrim back into the game as he capitalised on a poor touch from Harry Barbrook to fire high into the net past Woody Williamson.

The Antrim number eight grabbed his brace minutes later as he weaved past two defenders in the box before finishing past the keeper with his left foot.

Ipswich were straight back at Antrim after the equaliser as Ash Boatswain fired it against the post after a smart turn in the box.

Despite their dominance in the first-half Ipswich found themselves level going into the break.

Sean Moore started the second-half as he ended the first as he cut inside and narrowly dragged his right footed shot wide.

Jack Manly then did the same up the other end as he cut inside on his right foot and bent it wide of the mark.

Nico Valentine still had his spark in the second half as he once again drove from the right but dragged his right footed shot narrowly wide of the far post.

Ten minutes into the second half, Antrim’s Lewis Tennant got the ball out of his feet beat two men, then hit a thunderous shot towards goal but it rebounded off the post and away to safety.

Ipswich Town went one better a minute later after a good team move led to Jack Manly passing it into the net past Orann Donnelly.

The midfielder was set up by fellow goal scorer Ben Haddoch who turned well to find Manly.

Ipswich were back in their groove now as the Nico Valentine show continued when he turned away from his man in the centre of the park before driving to the edge of the box and testing Orann Donnelly in the Antrim net.

County Antrim shot themselves in the foot for Ipswich’s fourth as defender Aidan Lillis played it back to keeper Orann Donnelly but the keeper had already came out to collect meaning Gerrard Buabo had an open net to pass the ball into.

Antrim went straight back at the English side as Michael McLaughlin rose highest to meet a Jack Montgomery delivery but it failed to overly test substitute keeper Danny Cullum.

Gerard Buabo had a chance to grab his brace in stoppage time but he failed to hit the target when the ball was pulled back to him.

Antrim fought well in the second-half but ultimately were beat by a better opponent on the night.

The County can be proud of their tournament though as they won four out of their five wins.