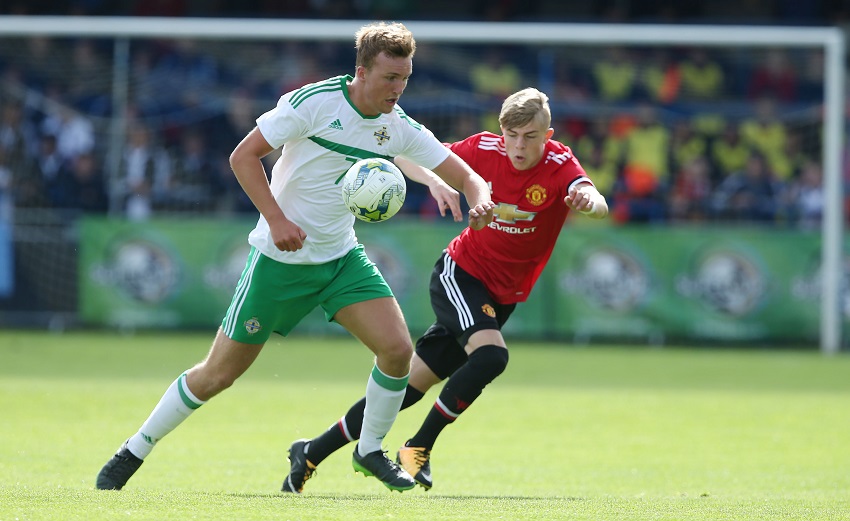 Manchester United’s English FA Youth Cup winning team will be making its way to Northern Ireland later on in July to take on some of Northern Ireland’s future stars in a two legged Challenge match at the 2022 STATSports SuperCupNI.

The announcement was made on Thursday night prior to the draw for the Premier, Junior, Youth and Minor sections at the National Stadium at Windsor Park.

The Old Trafford youngsters claimed the Youth Cup for the 11th time as they defeated Nottingham Forest earlier on in May. United will start preparations to defend their title in 2023 and the side managed by Travis Binnion will face Northern Ireland in an U19 challenge match.

Chairman Victor Leonard attended the Youth Cup final, and he paid tribute to Manchester United for their continued commitment to the tournament.

“Manchester United have been long standing supporters of the competition and we are delighted to once again welcome them to our Junior section and in the Challenge section where they will take on a Northern Ireland U19 side managed by Gerard Lyttle.

“In 2019 we hosted Manchester United for two U21 games and in those two games against Rangers and Ballymena United their side included the likes of Anthony Elanga, Brandon Williams and NI international Ethan Galbraith, all of whom went on and played for the first team after their appearances in Coleraine and Ballymena.

“The side that won the Youth Cup earlier this month was stacked with talent, and I am sure Erik ten Hag will be keeping a close eye on their progress ahead of next season.”

The Challenge matches will be played by U19 teams and the first match will take place at the Coleraine Showgrounds on Monday 25th July, with the second game at the Ballymena Showgrounds on Wednesday 27th July. Both games will have 7.30pm kick offs and will be all-ticket, with information regarding ticketing to be released in the coming weeks.

Elsewhere in Thursday night’s draw, one of the standout ties on opening night will see Rangers face Mexican side Santos Laguna, while Manchester United will face debutants Surf Select from USA.

In the Premier section, Right to Dream will face Californian newcomers San Francisco Glens and there is an Ulster derby with County Down facing County Armagh and Londonderry will face top opposition in Club Puebla from Mexico.

In total 64 teams from all four corners of the world will compete across four hotly contested male categories at U13, U14, U16 and U18.