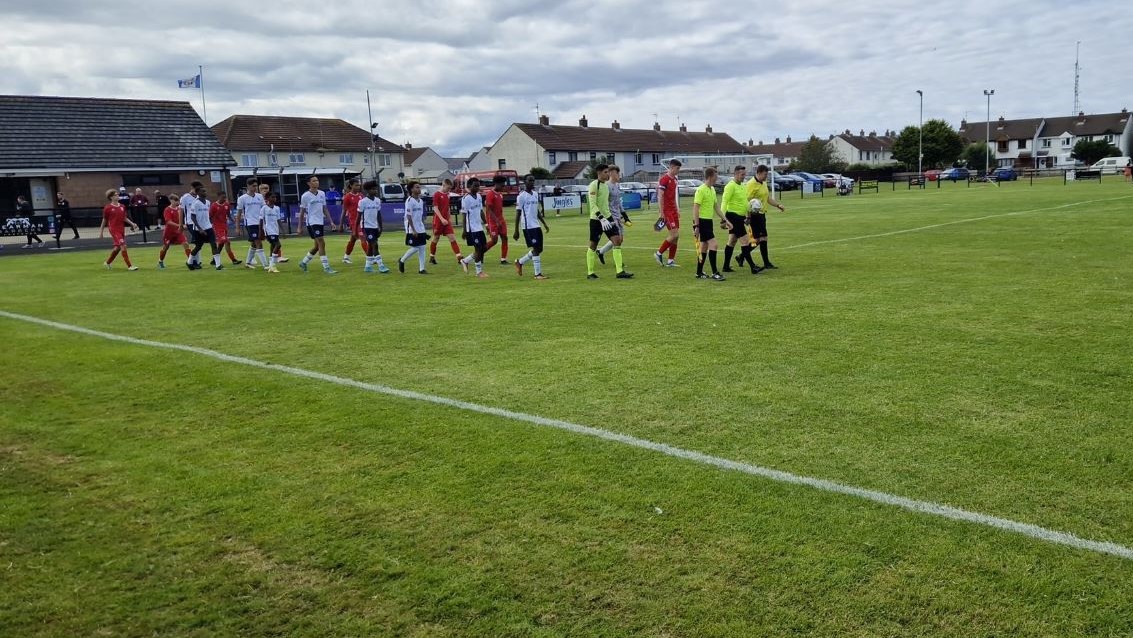 MK Dons bounce back from defeat in style as they brush aside IDA Bermuda in Portrush.

The English side won 5-0 thanks to goals from Callum Tripp(2), Edwin Daffern, Michael Brammeld and Chase Medwynter.

IDA Bermuda did have a penalty saved in the first half but they were never really in the game from the first whistle.

The young Dons fell to a 3-2 defeat in their opening game to County Londonderry but you wouldn’t have thought that by the way in which they started the game.

In the 6th minute Edwin Daffern’s deflected volley struck the post before being cleared away after great pressing from Michael Brammeld won the ball back high up the pitch.

This was a sign of things to come as minutes later rangy captain, Callum Tripp made a marauding run into the Bermuda box before being stopped by Nathaniel Swan in the Bermuda net.

Minutes after clearing the ball off their goal line through Jack Norman, MK Dons finally took the lead they deserved through Tripp, who expertly poked the ball into the bottom corner after it fell to him in the box.

The score line was quickly doubled as Edwin Daffern made it two in two minutes as he swept the ball home after a neat one two with Chase Medwynter.

In the 19th minute the Dons made it three goals in four minutes as Tripp grabbed his brace, leaving the Bermuda goalkeeper flatfooted in net.

The action didn’t stop there though as Bermuda went up the other end minutes later and earned themselves a penalty after Chance Eve was brought down in the box.

Eve stepped up to take the penalty but Sebastian Stacey in the MK Dons goal was determined to keep his clean sheet and magnificently dived to his right to save the penalty, further adding to Bermuda’s dismay.

Further chances were created by the English side in the first-half most notably for Michael Brammeld, but he couldn’t beat the keeper when he was played in behind on 29 minutes.

Brammeld wasn’t to be denied though as he coolly dispatched Chase Medwynter’s squared ball into the back of the net to complete a near perfect first-half for the Dons.

The second-half didn’t have quite the same action as the game started to get feistier as it went on with four yellow cards brandished by the referee.

However, this didn’t prevent Chase Medwynter grabbing a goal of his own after setting one up in the first-half.

The skilful and athletic left winger slotted home from close range after substitute Simone Troso cut the ball back to him from the by-line.

Although the English side didn’t create as much in the second-half they cruised to victory against the Caribbean side who struggled to build any kind of possession.

After the game MK Dons Coach, Ryan Simmonds spoke about his delight in the response to the opening day defeat at Scroggy Road.

He said: “Bounced back from obviously the disappointing defeat yesterday, they executed the game plan, scored five good goals and a clean sheet so very impressed.”

Speaking about captain Callum Tripp he said: “Yeah Callum’s a good player, someone that we rate highly, but it’s our jobs to keep him grounded and doing the basics like he did today.”

MK Dons will look to make it back-to-back wins as they face Manchester United on Wednesday in a game Simmonds said would be “tough” but they are “looking forward to” the game at Broughshane at four o’clock.

IDA Bermuda will look to try and get their first win of the tournament on Wednesday as they face County Tyrone at Ahoghill at five o’clock.