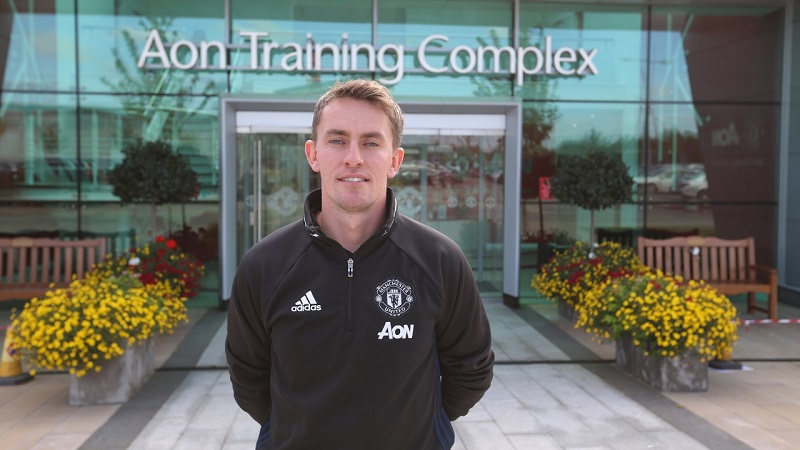 Stand by to be impressed when Manchester United’s latest batch of rising stars roll out at Coleraine Showgrounds this Saturday (5pm).

The Old Trafford youngsters could give Real Madrid, Barcelona and Bayern Munich a run for their money, according to United’s under-18s coach, Fermanagh man, Kieran McKenna.

The Reds enjoyed an entertaining first season under the former Tottenham youth coach who brings them to help launch the 35th SuperCupNI this weekend.

McKenna and his young stars are just back from a training camp in Austria and expected to be among his squad is Glengormley teenager Ethan Galbraith who has happy memories of playing at Ballycastle Road.

One of United’s new faces, midfielder Galbraith, formerly at Linfield, picked up a winners’ medal playing for Northern Ireland – ironically against Manchester United – in the Under-13 final in 2014 when the local lads ran out 5-1 winners.

With McKenna at the helm now, the Under-18s scored at least three goals on 12 separate occasions on their way to a fourth-place league finish last season and senior manager Jose Mourinho clearly took notice. As well as giving Angel Gomes his first team debut, the Portuguese boss included Zak Dearnley in his matchday squad for the final league game of the season against Crystal Palace.

And, with United’s under-18s having held their own against bitter rivals Manchester City and Liverpool this season, McKenna believes academy football is in rude health in England.

“I think there are a lot of things in this country we’re doing right in academy football,” he says. “I think the standard of games is really high and we’ve had some terrific games this year.

“After the derby with Manchester City before Christmas – a 2-2 draw – several coaches at national level said to me it was the best game of Under-18 football they’d seen this season – and in quite a few other seasons as well. I thought it was two really good sides going toe to toe and everything you want to see in a high-level youth game.

“I’d say the ones against City, Chelsea and some of the games with Liverpool have been probably as high a level of games as Real Madrid versus Barcelona or Bayern Munich versus Borussia Dortmund or any game you might have in Europe at that level.”

Academy chief Nicky Butt, like McKenna another graduate of the SuperCupNI, stepped in as the club’s Under-23s interim boss after Warren Joyce’s departure to Wigan in November – leading the Reds to a sixth-place finish.

And while Axel Tuanzebe, Demetri Mitchell, Matty Willock, Scott McTominay and Josh Harrop have left their mark on the first team, McKenna feels the Under-18s still face a challenge when moving up a level.

“I think there are a lot of good things in the academy system but I feel the biggest challenge is still what comes at the next step when they leave the youth team and when they progress,” he added.

“How do we get them opportunities to play competitive football?

“Whether that will be with first teams, on loan, in the Under-23s, I think that next step of the pathway is something everyone in youth development is looking at and trying to refine to make sure some of the good work going through the academies ends with the players at the end of it getting the right opportunities at the right times.”

Meanwhile, Manchester United’s Under-18 ranks for the new campaign were extended for last week’s pre-season training camp in Austria.

Defender Di’Shon Bernard was formerly with Chelsea, while two Manchester-born prospects are on the list – D’Mani Bughail-Mellor and Brandon Williams. Fellow Englishmen James Garner, Ethan Laird, Dion McGhee and James Thompson also move up to Kieran McKenna’s squad. Dylan Levitt is an Under-17 international for Wales.

Goalkeeper Jacob Carney has been taken on as an Academy student.

Northern Ireland provide the opposition in Saturday’s Coleraine curtain-raiser. Coach Stephen Frail has selected many locally-based players for the match.

Meanwhile, the 35th anniversary event kicks off at Ballymena Showgrounds earlier on Saturday when Northern Ireland and Wales Under-19 women’s team meet in the first of two games at the venue. Kick-off is 2.30pm with the return match on Monday at 12 noon.

The traditional welcome ceremony and parade of competing teams takes place in Coleraine town centre from 7pm on Sunday. Players, officials, organisers, referees and bands make their way through the main streets to the Showgrounds where the event will be officially declared open.

Matches in Premier and Junior competitions will be staged throughout the region with finals night at Ballymena Showgrounds on Friday.